The currency of the Republic of China represents China's modern monetary culture, and reflects the rise and fall of China's modern history, economy and finance. In the third year of the Republic of China, Yuan Datou recorded the earth-shattering history of the Revolution of 1911, and it has always been popular in the market, especially the good quality is scarce, so it is very popular among collectors. 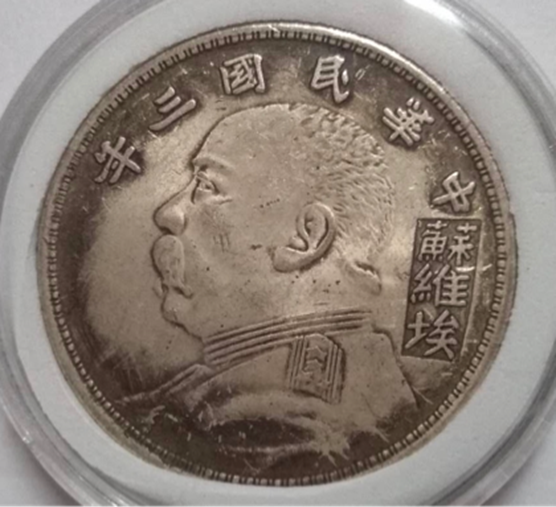 This Soviet version of the three-year-old Yuan Datou silver coin is engraved with Yuan Shikai's five-point side portrait on the front of the silver coin, with the traditional Chinese characters of "Three Years of the Republic of China" engraved on the top, and the traditional Chinese characters of "Soviet" engraved on the right side of the portrait from top to bottom, surrounded by external boxes; The back of the silver coin is engraved with the Chinese character "One Round", and the golden harvest pattern composed of two rice ears, and the lower part of the rice ears is tied and tied with silk ribbon. This Soviet version of Yuan Datou in the third year of the Republic of China has a sense of retro, with a long history, strong patina and clear Qian Wen; The Soviet version of Yuan Datou is the most valuable of all versions of Yuan Datou, and it has a high significance in commemorating revolutionary history and collecting cultural relics.

Soviet Yuan Datou, which witnessed the glorious period of chinese soviet republic, is a valuable revolutionary cultural relic. At that time, people used to call the old silver dollar "ocean" and the silver dollar cast in Soviet area "red ocean". The Kuomintang regime won't tolerate the silver dollar with the stamp of "Soviet" circulating in the market, and it will be recycled and melted after being collected. Therefore, the "Yuan Datou" with the stamp of "Soviet" has been handed down from generation to generation, which is more valuable than the ordinary original "Yuan Datou".

Representing modern Chinese monetary culture, reflecting the rise and fall of modern Chinese history, economy and finance, it has high artistic and cultural value, and also has certain functions of maintaining and appreciating value. At present, the number of "Yuan Datou" retained by the people is not too large, and silver is a precious metal, which has low collection risk and is very suitable for investment and collection. The Soviet version of this coin is extremely rare, so it has higher collection value.