[Collection Name]: Ten Articles of Commemorative Coin for the Founding of the Republic of China 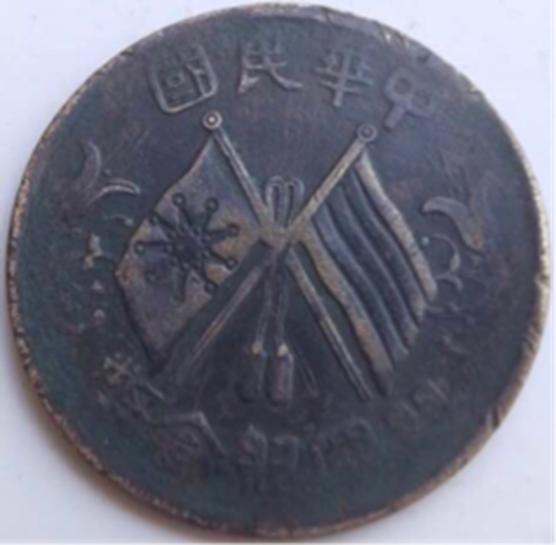 Copper coins are a large category of coin collection. Different editions of copper coins have their own unique characteristics. Looking at the collection market in recent years, it is easier for the public collectors to pay attention to and favor the rare rare treasures and the modern coins that have sprung up in the market.

The front pattern of the coin in this collection has a national flag crossed on both sides in the center, with the words "Republic of China" above and "founding commemorative coin" below. The pattern on the back is Jiahe grain composed of rice spikes, with "ten characters" written vertically in the center.

Double flag coins were produced during the Republic of China, which existed only for several decades in Chinese history. During these decades, there have been continuous wars at home and abroad. Therefore, it is not easy for coins to survive completely after endless years in the age of war and chaos. This copper coin is rare in existence and well preserved. The Qian Wen, clear in design, obvious in circulation trace, natural in coating and bright in copper color, has high cultural relics collection value, historical and cultural value and art appraisal value.

In recent years, "Double Flag Currency" has once become the darling of collectors. It occupies an important position in the history of coins, reflecting the modern history, economy and finance of our country. It is a symbol of our country's contemporary politics, military and economic culture, and is of great help to the study of the history of the Republic of China at home and abroad. As a non-renewable resource, the ancient coin is in the hot collection market, which will inevitably lead to its less and less existence in the world. This coin has very little existence in the world and has high collection value.